Do not fear mistakes. There are none. Miles Davis

Why do we sometimes fear mistakes? Everybody knows this or at least was in a situation where you got stuck into something. Especially when we are in a new position or new environment we sometimes feel limited and have the feeling to avoid making missteps or mistakes. And also when we experience the overwhelming possibilities, limitations, rules, or urgent things that we have to do, something holds us back to move. Because it gives us an overload of data and as a matter of fact no energy to move. So why not just start and trust ourself?

Sometimes action speaks louder then words and the basic idea is to keep playing instead of stopping to talk. There are two lines of thoughts here. One is about getting in action without too much holdback from anything and the other is how can we develop if we don’t make mistakes. An exercise to the former could be to focus on ‘what is not the problem’ or asking yourself or your team ‘what is the emerging energy or strength in the room where you all can work with’. To the latter, just take any action even if it feels like a mistake and sees it as a pivot point to change directions or a learning experience to get better. 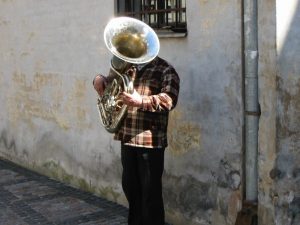 This is a picture from the streets of Riga. I made this picture while being in Riga for a presentation on Design Week. While walking to the streets I heard from a distance the nice sounds of the street musician playing on the tuba, when I finally saw the player I recognized that the instrument completely covered his face. He was not only visually united with his instrument but also playing without any restrictions. This picture for me is also a symbol that when you are prepared and ready you are able without any further planning to get into action. I believe that every one of us has a certain level of readiness to take the next steps. As an organisation, we have to find out what our level of action is. One possibility to find out is to learn an instrument and play (Ever tried the Ukulele?). There are many examples that were playing together and not talking can lead to better outcomes then logical thinking and arguing.

Do not fear mistakes. There are none.

Miles Davis is one of the biggest inspirations for me. Most of the musicians were talking about Miles as the ‘best listener who ever led a band’, he heard what everybody else was playing and with his voice and the ability to show new possibilities he was the glue to make it sound like a whole band. His instructions were famous in being vague, showing the right direction and also leaving enough freedom for own interpretation. So if you don’t believe that there are any mistakes everything is possible.

This is a take-out from one of the most famous recording sessions of the album Kind Of Blue from 1959. We hear the quintet playing. We hear the start of Freddie Freeloader and some noise right before the tape starts, ‘take 1, no title’ so the title was not yet decided. After a few seconds, the recording stopped and we hear Miles ‘It is too fast’, but also the recording engineer that reminds Miles not to move away from the microphone. Freddie Freeloader is one of the most played jazz standards in the world and it is very charming to hear how this great recording started – with a mistake.

This card is connected with JAMMIN’, the power to take what you have and bring it to the table or rehearsal room. It also contains the unlearning factor, the question of what do we have to unlearn if we are stuck. EMPATHY helps us to see that making mistakes makes us human and that it’s not a big deal to make mistakes or commit that you have made some and encourage others to try and get into action. This is also the precondition of AGILITY because you can never be agile when there is a lot holding you back while performing. So REMIX is the performance of the best you can do now. See Music Thinking Framework for an explanation of the cues.

Some Music Thinking on Branding and Miles Davis
Miles Davis.com
Quality, innovation, collaboration, inspiration. Have a look into 1959 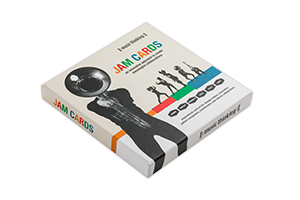 An inspirational card set for change makers, pattern recognisers, innovators, transformers and natural collaborators. The Jam Cards consist of 38 inspiration cards and six cue cards. All inspiration cards have a keyword, a visual and a sonic trigger, a trigger question, an inspirational quote, and six cues that connect with the Music Thinking Framework. You can use the cards from a strategic point of view, knowing what you want or need and a serendipity approach open for everything that will happen. ‘Music Thinking’ lets people work and play together in a new way with inspirations from the rich world of music. Find more quotes like Do not fear mistakes. There are none. Miles Davis

Order the Music Thinking Jam Cards.
You can order the jam cards via your local bookstore (worldwide) and have a nice chat with the people there and try the cards right away, or just buy them directly at BIS Publishers.
Yes, you can also find them at Amazon.com, Amazon.de, and Bol.com